So Wizkid and I met with the Commissioner of Police today…and here’s what happened :-) LINDA IKEJI 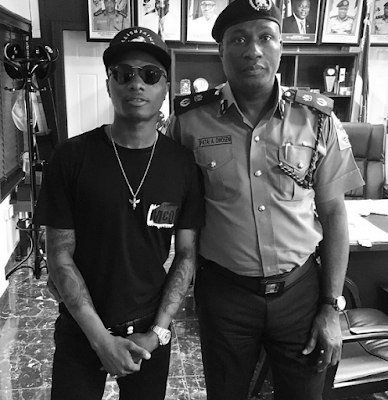 So, I am going to write about this Wizkid matter for the very last time. Anything else after this will no longer concern me. So Wizkid and I met with the Commissioner of Police today and when the Commissioner asked me what I wanted them to do with the case…I told him that I wanted peace. And the reason why I insisted on peace and not to drag the matter further i.e go to court, is because Wizkid and his lawyers have been apologizing since Friday, up until today!

I spoke with Wizkid through his lawyer on Friday April 15th where he tendered an apology to me and said he wasn’t a violent person, that he didn’t mean what he said, that it was just an emotional outburst. And then he asked for forgiveness. Please continue…

But despite forgiving him, he still had to show up at the Police HQ to officially apologize and write an undertaken which he did today.

I see a lot of negativity has come out of this case with Wizkid – with many folks bashing me for reporting a threat on my person. But here’s my consolation and why I am glad this happened. I promise you, especially the ladies, Wizkid will never threaten you with harm again. At least not in public. I believe I am the last bus stop. He will think twice before threatening another human being again on social media. A police file has been opened for him, and he has been cautioned. The day he threatens another human being again with harm, then…

Having said that, I turned down taking a photo with him and the police commissioner this afternoon. One of his people took a pic of him and the commissioner with me in it and my people insisted they delete it. Not because I haven’t forgiven him, I just don’t need the extra drama.

I wish Wizkid all the best and will continue to celebrate him.
God bless us all.