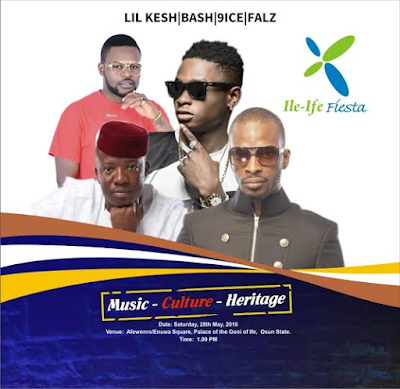 In what seem to be a gradual unveiling of the super stars storming Ile-ife to perform on the stage of the so much talked about Fiesta coming up in May, In-House Entertainment and partners Mauve 21 ‎have started revealing the artistes and celebrities to expect at the event.

Ayo George; the project director gave more hint of what is lined up and what we should look out for during the Fiesta while speaking with select media platforms in Lagos recently.

“At the start of this whole plan, we told Kabiesi, the Alayeluwa, Ooni of Ife that we were bringing Lagos Standard to Ile-Ife. Everything that can happen in Lagos can happen in Ile-Ife. From the kind of celebrities and performing artistes to the ambiance, to the project delivery, brand association and a whole lot. For the first time in Ile-Ife, there would be fire-works immediately after the Ooni’s address. A whole lot is under wraps for now, and would be unveiled at the event to promote Ile-Ife and also the Yoruba culture and  heritage. We expect between 6,000 and 8,000 people attending for FREE, and this means a lot to the economy of the whole community” George Said.

Apparently, the coming event is going to be fun filled and full of pleasant surprises‎. May 28 would definitely at the end, be a day to be remembered for a long time as this event would open up Ile-Ife to the world of investors and tourists. Ile-Ife Fiesta is one of many projects lined up to facilitate the industrialization of Ife Kingdom.